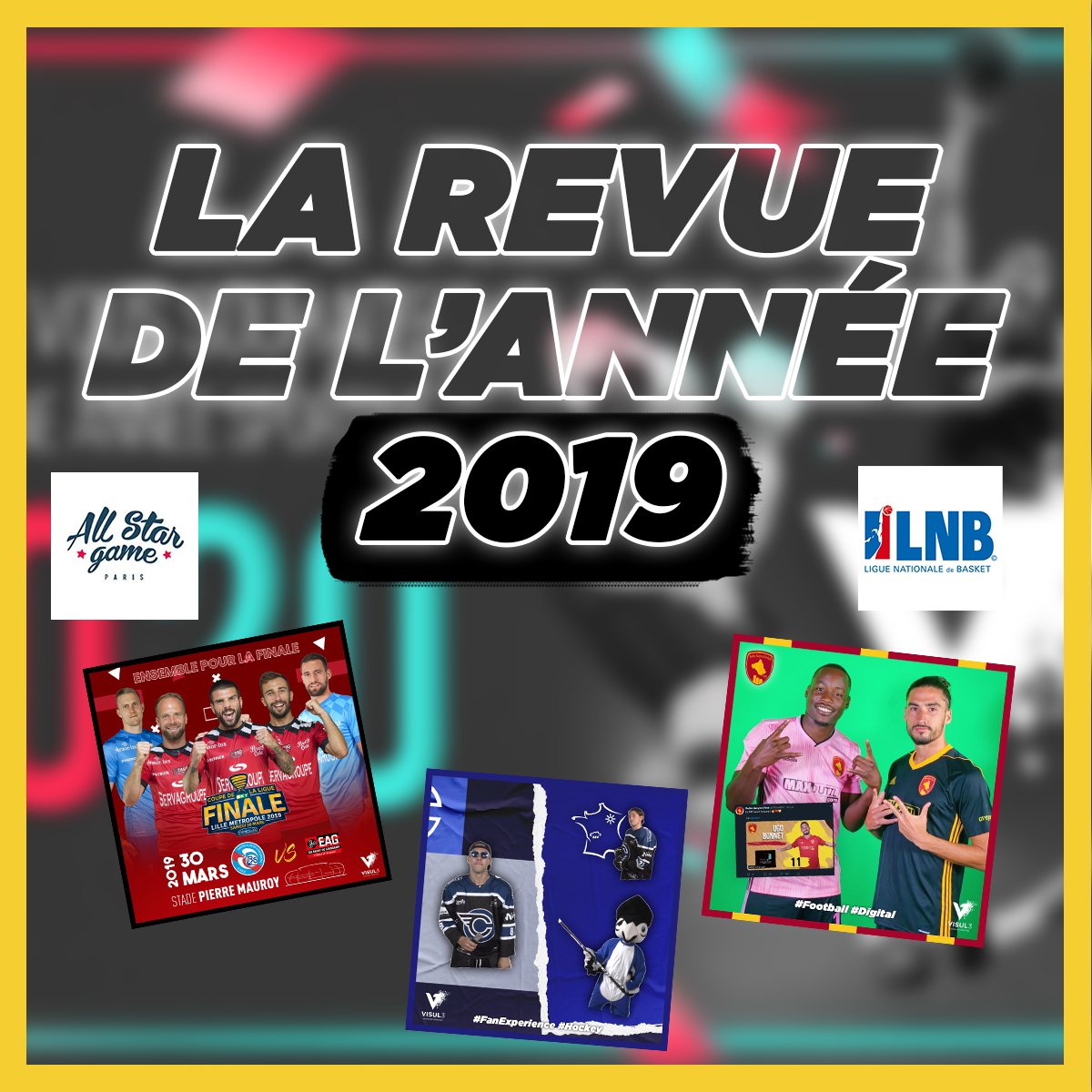 Visul3 looks back on the year 2019 full of creations!

This year 2019 was the third full year of activity during which we had the opportunity to work and be part of many sporting events. These events are many and varied, it is sometimes difficult to notice us and yet, we are well behind many creations. Let's take a look at this year’s major projects.

In 2019, Domino’s Ligue 2 was Visul3’s favored playground. The US Orleans experienced a start to 2019 on the heels of its end of year 2018 concluded in fireworks against the Parisian ogre, a League Cup game that allowed us to accompany the Yellow and Black on the whole of their organization.

Finishing at the 8th place, US Orleans finished far from its goals of maintaining, let’s hope that 2020 will allow them to raise the bar to maintain themselves again in League 2.

Two other of our customers also had a rather new relationship with this championship. On one hand, the Rodez Aveyron Football experienced the joys of the accession in League 2 last May after a magnificent season at the lower level. In their process of professionalism, the aveyronnais have called on our services to support them on various digital imperatives such as the realization of their «Player Cards» (shooting and editing) but also on the enhancement of their partners.

Thus we produced more than thirty Leds adapted to the diffusion in the two stadiums that hosted them (Le Stadium de Toulouse then their stadium Paul Lignon).

On the other side, the EA Guingamp, who joined Domino’s League 2 after a difficult season despite some great feats that we will talk about later.

Each year, the Rugby season can end with a twist. For several seasons, we have been accompanying the National Rugby League in the deployment of advertising messages across the courts. The final phase of the two major championships of France is always a special moment. We participated in the creation of boarding Leds promoting these finals. Then we also participated in the Boxing Day rugby by also developing the whole promotional LED cover.

For the first time this season, we collaborated with a first division hockey team: the Corsaires de Nantes. At the beginning of the season (September 2019), we went to Nantes for a shooting with the players of the team in order to make their presentation videos to be broadcasted in their rink but also on social networks. As a result of these achievements, we have also integrated the various green shootings on Instagram as transparent stickers that the club and supporters can now use in Instagram Stories.

2019 was also the year of the Coupe de la Ligue final in Lille, near our studio and the coincidence made it host one of our oldest clients the EA Guingamp.

Qualified for the final after having eliminated the PSG and the AS Monaco, the Bretons went to Lille to defy Strasbourg. On this occasion, we had carried out numerous activations to communicate around this event on the club’s networks. A guide dedicated to fans was made to gather all the places, dishes and activities not to be missed during their stay in Lille.

We also accompanied Guingamp in his Breizh Ch'ti Kalon Tour, making a marathon of rhythmic videos as they travelled from Brittany to the North, all by tractor and van.

Then, on the day of the final, a member of our team was in charge of making pre-game stories in the streets of Lille to reflect the atmosphere in the Red and Black camp.

France was lucky enough to host a major tournament, the Volley-ball CEV Euro in Montpellier, Nantes and Paris, and on the occasion of the three biggest games of the competition taking place in Paris-Bercy, we created new graphic designs. We did this for a new device that we had not yet experienced, in three blocks : presenting the event, the nationality of the player and his identity.

In line with the EURO of volleyball, we collaborated with the National League of Basketball and Sport Plus Council in the organization of the biggest national basketball event: the All Star Game Paris 2019. Bringing together the best players evolving in our country, this day-event takes place every year between Christmas and New Year at the Accord Hotel Arena in Paris-Bercy and was animated for the third consecutive year by our studio. After a work of animation on the giant screens last season with Benny of the Chicago Bulls, we worked on the whole dress up of the different moments of the match to plunge the Parisian room into a most crazy atmosphere.

The entire Visul3 team thanks all the people who collaborated around sports projects with its studio and wishes everyone a good and happy year 2020 ever more dynamic, digital and sporty.

This website uses cookies to improve your experience while you navigate through the website. Out of these, the cookies that are categorized as necessary are stored on your browser as they are essential for the working of basic functionalities of the website. We also use third-party cookies that help us analyze and understand how you use this website. These cookies will be stored in your browser only with your consent. You also have the option to opt-out of these cookies. But opting out of some of these cookies may affect your browsing experience.
Necessary Toujours activé
Necessary cookies are absolutely essential for the website to function properly. These cookies ensure basic functionalities and security features of the website, anonymously.
Functional
Functional cookies help to perform certain functionalities like sharing the content of the website on social media platforms, collect feedbacks, and other third-party features.
Performance
Performance cookies are used to understand and analyze the key performance indexes of the website which helps in delivering a better user experience for the visitors.
Analytics
Analytical cookies are used to understand how visitors interact with the website. These cookies help provide information on metrics the number of visitors, bounce rate, traffic source, etc.
Advertisement
Advertisement cookies are used to provide visitors with relevant ads and marketing campaigns. These cookies track visitors across websites and collect information to provide customized ads.
Others
Other uncategorized cookies are those that are being analyzed and have not been classified into a category as yet.
Enregistrer & appliquer
English
English French