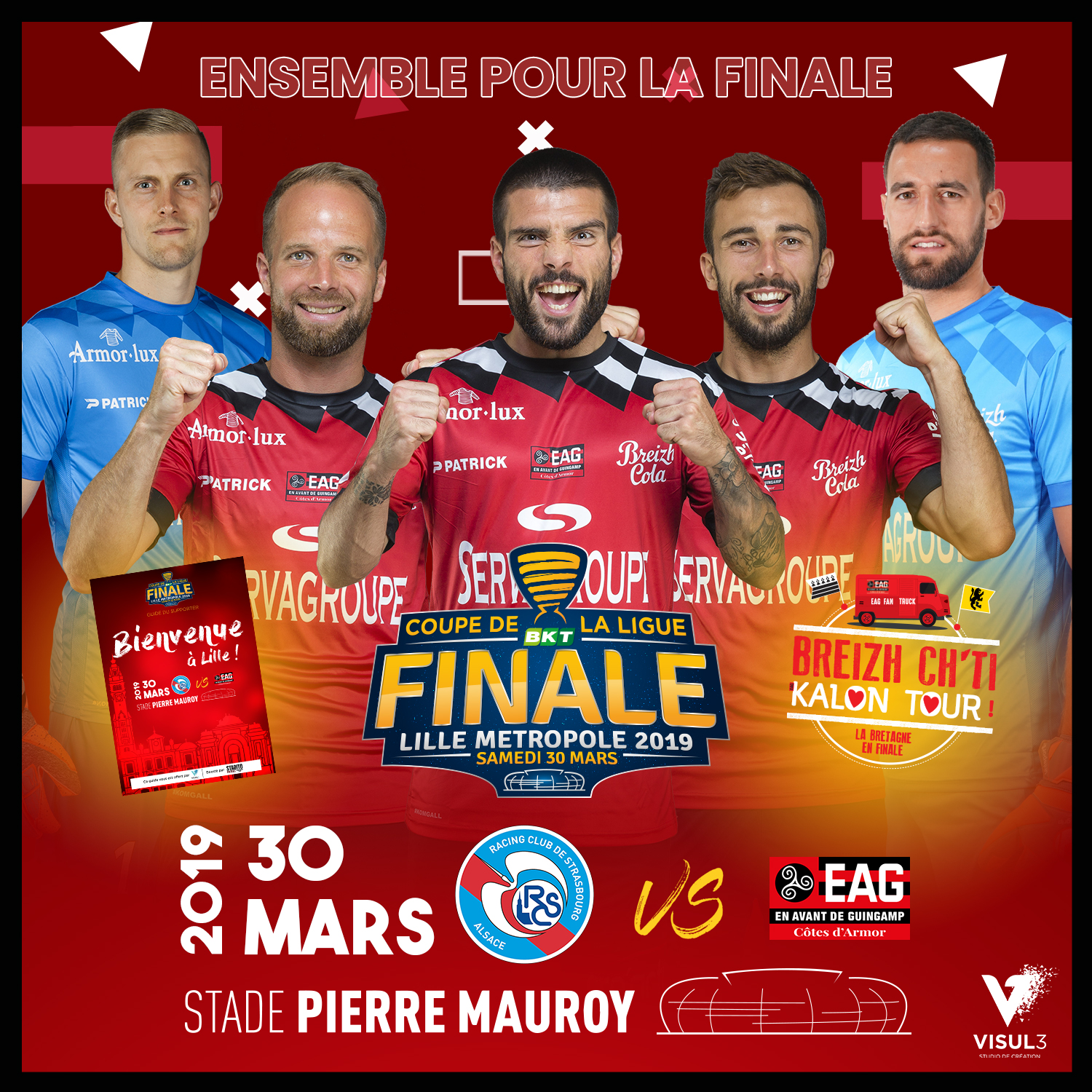 For several weeks now and after the victory of L’en avant Guingamp over Monaco on the penalty shots, we have been preparing the final of the Coupe de la Ligue, which was played on Saturday 30 March in Lille. Faithful to ourself, we accompanied EA Guingamp in the broadcasting, promotion and teasing process of this important moment for the club.

Based on a common reflection, we produced the « Guide du supporter » thanks to our knowledge of the territory hosting the final. From a photo shoot in the streets of Lille to the writing and layout of the guide, we wanted to bring the more complete and diverse guide for the fans to live their final weekend to the fullest.

EAG fan guide for a weekend in Lille
Publish at Calameo

Throughout the Breizh Ch'ti Kalon Tour, for which we participated in its visual identity, we post-produced interviews of the club’s partners, club supporters and former players. This fast-paced format is suitable for social networks to make a day-to-day journey.

In addition to the above-mentioned content, Visul3 studio has made several videos dedicated to social networks such as four «Flashback» videos dedicated to each day of the week before the final, the steps taken by the EA Guingamp to reach the final or a final teaser for the D-1.

This website uses cookies to improve your experience while you navigate through the website. Out of these, the cookies that are categorized as necessary are stored on your browser as they are essential for the working of basic functionalities of the website. We also use third-party cookies that help us analyze and understand how you use this website. These cookies will be stored in your browser only with your consent. You also have the option to opt-out of these cookies. But opting out of some of these cookies may affect your browsing experience.
Necessary Toujours activé
Necessary cookies are absolutely essential for the website to function properly. These cookies ensure basic functionalities and security features of the website, anonymously.
Functional
Functional cookies help to perform certain functionalities like sharing the content of the website on social media platforms, collect feedbacks, and other third-party features.
Performance
Performance cookies are used to understand and analyze the key performance indexes of the website which helps in delivering a better user experience for the visitors.
Analytics
Analytical cookies are used to understand how visitors interact with the website. These cookies help provide information on metrics the number of visitors, bounce rate, traffic source, etc.
Advertisement
Advertisement cookies are used to provide visitors with relevant ads and marketing campaigns. These cookies track visitors across websites and collect information to provide customized ads.
Others
Other uncategorized cookies are those that are being analyzed and have not been classified into a category as yet.
Enregistrer & appliquer
English
English French